Red Wing Shoes has long since been a brand of choice for those looking for a sturdy leather shoe, whether that be on a Midwestern farm in 1918 or a branch of Costa in 2018.

Named after the company’s hometown of Red Wing, Minnesota, the company was founded in 1905 with the vision of founder, Charles Beckman. Beckman wished to provide workers in industries like mining, farming, and logging with a tough wearing but comfortable shoe. 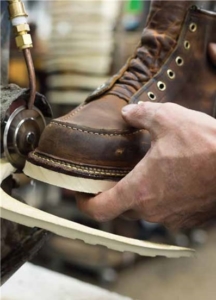 Like many of the long-running brand stories, Red Wing started out modestly but their eye for quality and detail quickly led to an increased demand for their products.
This led to natural expansion into additional industries.

In the modern day, the styles we tend to favour have their roots in a golden 50 year period of innovation between 1920-1970. This was a time of real growth for Red Wing, despite the interruption of World War II.

The 9111 and 877/875 models are probably one of the most recognized shoes from the Red Wing collection. They were first conceived for farmers and hunters which necessitated a sturdy construction and a strong sole.

Red Wing is one of many brands which have redefined their reason for being in contemporary times. While their outdoor heritage still stands up for those who want an iconic shoe on their feet when they step outside, a legion of new appreciators have taken the brand to heart.

Many items of clothing and footwear built for hard work more than 100 years ago have evolved, whereas some haven’t had to evolve much at all. In these days of smart phones and hot-desking, Red Wing has become a brand of choice for style-obsessed city creatives. Red Wing Boots were built for working and if that means sitting in a coffee shop with a MacBook rather than driving a tractor, it shows the longevity and timeless design of Red Wing Boots. Here’s to another century!