Our guest writer Eleni MacFarlaine finds out what makes Malikaa Wig – one of the best shots from India and a friend of The Sporting Lodge – tick. Although only in her 20s, Malikaa is fast becoming a woman to watch, as she travels the world competing at the highest levels and striving for that gold medal win!

Indian-born Malikaa Wig – a rarity of the sports world – is one of the youngest women representing her country’s trap shooting team, at just 20 years old. With eyes full of enthusiasm, Malikaa is leaning forward with a smile from ear to ear. She’s clearly eager to talk about her passion and intended profession.

Malikaa lives in Kanpur, India, which is also known as ‘Manchester of the East’. Due to its urban stature and heavy industrialisation, it can be imagined that it may be hard to stand out and make a name for yourself amongst 2.5 million inhabitants.

India is famed for its cricketing skill, adopted by a male majority. However, neither Malikaa’s age nor gender are points she believes could single her out negatively – she’s seems amused by the thought.

‘I’m confident! I feel the days of male domination in sport are gone,’ she laughs. ‘Males have been my main influence admittedly, although I am a proud sportswoman!’

‘My country has a rich history of brave women who took up arms during struggle. They fought for our independence!’ she stresses. ‘The same passion has been passed through generations and today I believe that the women of my country are as passionate for shooting as they were centuries ago. I know many other women who are excellent shooters and do very well in their field – that is why I can say I am confident.’ Wig is loquacious and eloquent. She gained her first big achievement, a bronze medal, at 19-years-old whilst competing in the Trap Women World Championship in Lima and relishes in talking about the subject. ‘Becoming the junior national champion in trap is one of my greatest achievements. I now bear the tricolour on my shooting jacket!’

‘Both my father and my forefathers were all in the [shooting] profession, I could not ignore this, I suppose I could say it runs in my blood.’

She is determined to learn through sport and insists that she has learned many lessons since first learning to shoot. ‘I have learned to be self confident and independent. Before I started shooting I was a very indecisive person, yet I have gained knowledge in handling countless different, difficult situations.’ Malikaa’s age is turning into a reminder that has to constantly be reiterated; barely an adult, this young figure holds impressive sensibility.

Taking age into further account, when asked about having possible other hobbies she seems extremely keen to inform. ‘I love chatting with my friends; I dance and appreciate good food. I’m just a normal teenager, I love badminton especially! I try to stay active as I have always been made aware of its importance.’ 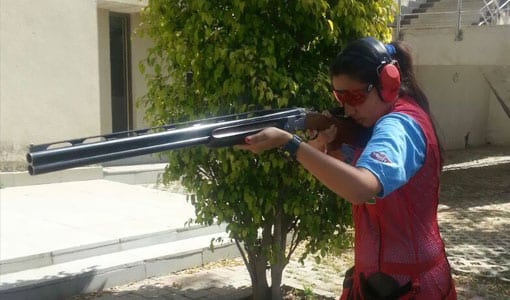 When competing, it’s nothing too outlandish to associate guns with fear due to news coverage. Upon being asked if she feels any sense of danger holding a gun, Malikaa seems shocked. ‘I believe that shooting teaches one to handle firearms properly and safely. Surely this makes it one of the safest sports, no?’ Well played, Wig.

Malika has pushed through competitions, sometimes being the youngest competitor. It’s refreshing to witness her high hopes for the near future and to hear her make reference to the Olympics. ‘It’s where I want to be [the Olympics]. I would love to win a gold medal for my country, but especially for my parents.’

The young woman will be attending further trials in April to determine whether she will be able to qualify for further competition worldwide. Germany, Finland, Italy, Iran and Kuwait will serve as the five destinations to further prove her worth within her field.

One of Malika’s all time heroes, about whom she speaks with great respect, is a previous shooting Olympic silver medallist – Colonel Rajyavardhan Singh Rathore. He is famed for his athletic talent and political opinion, having been both a flag bearer for India during the Olympics and the recipient of the Padma Shri (a special award from the Government of India). It seems as though Wig would be delighted to follow in his footsteps.

Many people will never know how it feels to hold, or even shoot a gun. The portrayal of firearms is often surrounded by controversy, a controversy that young Malikaa seems to overlook. She associates her sport with positive connotations, skill and trust. She goes on to describe the feeling of competing as ‘nerve-wracking but exciting’.