If you’re not familiar with Bernard Weatherill, Neil Summers digs into the history.

The name Bernard Weatherill is one that is synonymous with the world of bespoke tailoring. Starting life a family business in Sunninghill, Berkshire within two years they had their own shop on Savile Row and by 1920 had acquired a royal warrant to King George as riding clothes outfitter and livery tailor. Over the past 100 years the brand has continued to maintain its reputation for excellence as well as attract a number of high profile customers which includes a continuing royal warrant for the current Queen. Though by the 1950s the brand merged with Kilgour their suit-making neighbours on Savile Row who at that time were famous for creating Fred Astaire’s morning coat for the film Top Hat. 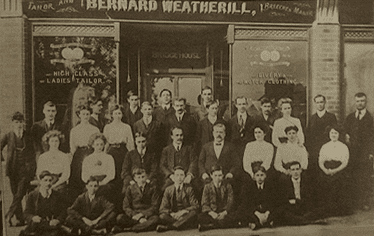 When the swinging sixties arrived famous faces such as Jackie Onassis and Sean Connery were regular visitors to the Savile Row shop. The reason for James Bond dropping by being to be fitted up for his Weatherill designed tweed suit made for his role in Goldfinger. As well as movie stars, sporting celebrities have also been regular customers at the store over the past century, with Weatherill being given the honour to make riding coats for the entire British equestrian team at the Olympic games in Atlanta in 1996.

Although their high quality products are now sourced from around the globe, Bernard Weatherill’s outerwear, breeches and accessories continue to be manufactured and hand crafted in the UK. As recognised experts in their field Bernard Weatherill continuing to make the finest in traditional civil and sporting tailoring with a modern outlook.