WE DECIDED TO ASK SPORTING LODGE AMBASSADOR AND RISING STAR OF THE CLAY SHOOTING SCENE FAYE WILLS SOME QUESTIONS ABOUT HER CHOSEN SPORT. TAKING TIME OUT FROM HER BUSY SCHEDULE FAYE TALKED TO US ABOUT EVERYTHING FROM SNAPCHAT TO SKEET SHOOTING.

So Faye, can you tell us all about yourself and how and when you became involved in clay shooting?
I started shooting English Sporting when I was 16 and working part time at my local gun club. I don’t come from a shooting family so it really was just a case of learning because of the job. From the moment I shot my first clay, I was completely hooked!

We hear you’ve also been aiming for a place on the Olympic Skeet team, how’s that Going?
I only started Olympic Skeet this year after being invited to join the British Shooting Talent Programme, so while I am very ambitious and have a few years of shooting behind me, it is very different to what I have done before and there is a long road to being good enough to compete for theGB Team. Sadly I think that Tokyo is a little too close as I still have a lot of work to do, but I have set my sights on competing for a place on the team for the 2024 Olympics, and hope to start shooting home and maybe even European competitions within the next year.

How often do you have to train to be in tip top condition and what does your training regime consist of?
Unfortunately Olympic Skeet isn’t very well catered for in my county, and the two nearest grounds that offer it are an hour and 45 minutes or 2 hours from where I live respectively, so at the moment I am only able to train four or five times a month, usually twice with my British Shooting coaches and twice at a ground locally to me which doesn’t have an Olympic layout but does wind the springs up on their English Skeet targets so I do have something a bit closer to the Olympic speeds. Ideally, to keep my muscle-memory and stop myself falling back into bad habits, I should be training twice a week on an Olympic Skeet layout, but I am not sponsored and am selfemployed so it’s difficult to get that sort of time on the targets that I need to shoot.

How many guns do you own?
At the moment I only own one, my fitted Zoli Kronos with fixed skeet chokes. As Olympic Skeet is quite a tough discipline and is very different from the others, there are many shooters who will only shoot that and not compete in other disciplines. I sold my sporting gun, a Blaser F3 Pro, to fund my skeet gun, and haven’t shot sporting since! I am looking to maybe buy a game gun at some stage for the beaters’ days I attend, but that might be a while yet!

“SHOOTING IS A SPORT THAT IS HEAVILY DEPENDENT ON YOUR PSYCHOLOGICAL WELL-BEING AND IF YOU START TO DOUBT YOURSELF, IT WILL REFLECT IN YOUR SCORES” 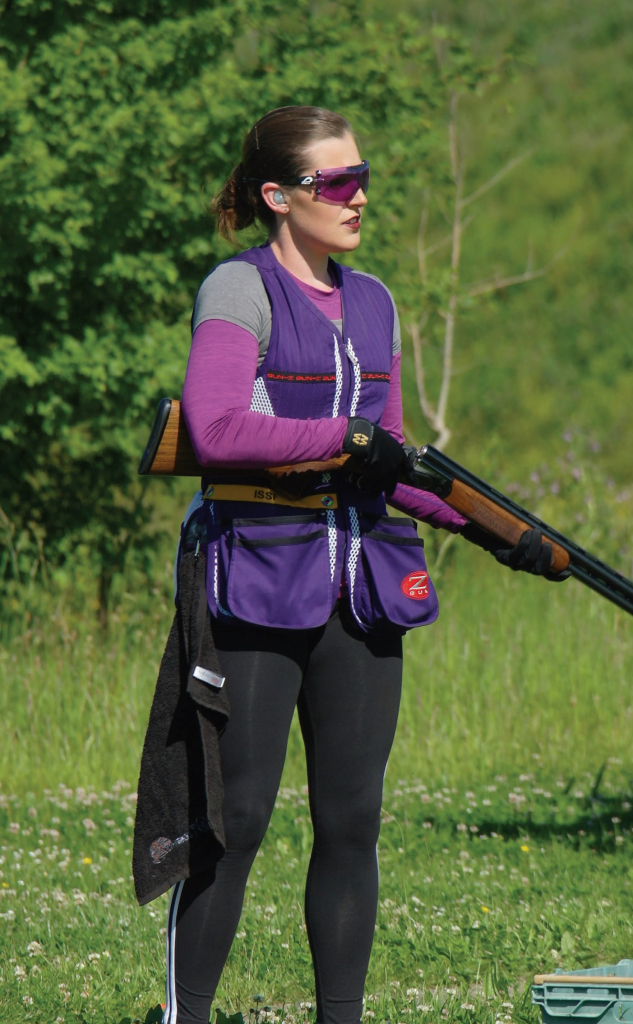 How did you get involved with the Sporting Lodge and what does your role as one of their ambassadors involve?
I enjoy using social media and through this, the Sporting Lodge got in touch and asked me if I’d like to road test some of their products. My role is to wear the gear the Sporting Lodge provide me with while shooting, loading or beating and really put it to the test in the environment it’s made for. Once I’m happy with the capability of the clothing and equipment, I’ll take to Instagram, Twitter, Facebook and Snapchat to spread the word as well as giving feedback on it to the Sporting Lodge.

What are your personal favourite brands that the Sporting Lodge stocks?
Dubarry is a firm favourite of mine as I own a pair of their boots and know already how good they are for what I do outdoors; they are warm, well-fitted (I have quite narrow calves!) and very durable, so even though they are quite pricey they are well worth the money because they last a long time. Percussion is an emerging French brand which I really like too, as their clothing is well-suited for any type of shooting or outdoor activity; I know some local gamekeepers who swear by their Percussion trousers because they are waterproof but breathable at the same time.

How important is wearing the right clothing when shooting?
For me, being dressed properly for shooting is a huge thing. When shooting clays I find I shoot better in some clothes than others; I don’t shoot in jeans anymore, for example, because I feel that the tight material restricts my body when I’m moving my gun. It’s vital that you feel comfortable with how you are dressed to keep focused on the targets – whether they are clay or game. It’s a very personal thing a lot of the time, but the Sporting Lodge offers a great variety of clothing to choose from so there are lots of options available!

Which places either UK or abroad have been your favourite to shoot at so far?
Sadly, I have neverbeen able to shoot abroad, but I have been to a variety of grounds across the UK when I shot for the county team and in the Kent and Sussex Clubman Classic. My favourite so far has definitely been the National Clay Shooting Centre at Bisley, but I will always have a sentimental attachment to my local sporting ground, Willow Farm.

Do you have any tips for those of us hoping to improve our shooting skills?
I think my main one would be to not worry about what other people think. When I shot my first registered Olympic Skeet earlier this year, I was really put off by how poorly I performed in comparison to the other people on my squad; I was embarrassed at how low my scores were and I think I was more focused on that and making a good impression than I was on the actual clays themselves. I lost a lot of confidence that day because I was worried that people would be sniggering behind my back about how badly I had shot. I was reminded recently that the only person who cares about your scores is you, so don’t ever be too nervous to try something new, or go out with a group of people who have been shooting longer than you have, or ask for help when things are going wrong. Shooting is a sport that is heavily dependent on your psychological well-being and if you start to doubt yourself, it will reflect in your scores – so just do whatever it is you feel you need to do in order to achieve what you want to achieve.

What are plans do you have for the future?
The rest of this year I will just be dedicating to improving my skill, and hopefully attending some more registered shoots so that I am ready at the start of next year’s competition season to maybe start attending higher profile shoots. I really want to start putting some good scores in soon and try to get some sponsorship too!

Keep up with Faye’s movements on her facebook page at https://en-gb.facebook.com/fayewillsclayshooting/
Photography: George Wills & Tony Smith 2017/2018